Of all Shakespeare’s tragic heroes Othello seems to be the simplest in temperament yet weak enough to be easily beguiled by a villain. He is brave and fears no danger to life in the battlefield like Macbeth, though he falls an easy prey to the evil design of a rouge-like King Lear. Like out other protagonists of Shakespearean tragedy Othello is also a royal personage. He cannot be conceived as a Negro but as a high and chivalrous Moorish chief. His life is a thriller and his own reflections on the part events create a sense of awe and wonder in the mind. It is a life full of experience of ravage life. Othello speaks of antres vast and deserts rough quarries, rocks, and hills whose heads touch heaven of the cannibals that each other eat. In fact, his life is a long series faced them with courage and determination. It was the narration of these hardships which caught the fancy of Desdemona.

The most remarkable dimension of his personality is matchless soldiership since he was seven years of age, he had been a soldier. Even when he defends his wooing of Desdemona he speaks with the accents and conviction of a soldier. At the same time, he is very much conscious of the lake of polished phrase and mannerism of a counter. His rugged and forceful discourses reflect upon his being a born soldier. Othello’s greatness as a soldier is not only acknowledged by the Senate but also by his enemies Iago’s reluctant confession highlights Othello’s significance as the leader of the troops.

“For he’s embarked
With such loud reason to the Cyprus wars
Which even now stand in act, that, For their souls.
Another of his fathom they have none
to lead their business.”

The Duke pays him a glowing tribute to Othello’s skill and sterling qualities. Though he may be an Alien and strange yet the safety of the republic lies on his shoulder.

A close scrutiny of the drama reveals the goodness of the heart and spirit of this protagonist. It is chiefly his innocence and purity which leads him to tragic circumstances. Iago exploits his simplicity and wrecks his life to satisfy his malicious nature Othello allows himself to “be lead by the nose” as asses are. The man is certainly annoying enough to believe that Iago is an honest fellow. Not even for a single time, Othello brags about the royal ancestry he hardly ever speaks of his deeds of Valerie. Throughout the drama, Othello displays passionate loyalty to the cause of the republic. He is a modest person but his modesty breeds self-distrust errs on the side of inferiority complex. Taking advantage of this shortcoming Iago saws the seed of suspicion in his mind. When Iago lies him with subtle suggestions he recalls the word of Barbantio
“Look to her, Moor, if thou hast eyes to see.
She has deceived her father, and may thee.”

In his ordinary intercourse with the word, Othello shows a lofty dignity and self-possession by a mere word he stops the fight between his followers and those Barbantio. Lodovico recalls his self-possession when wrought by jealousy, he has totally lost his violent passion for surfing in its place. Since the drama is a tragedy of jealousy the hero is understood to be suffering from the green of jealousy. Despite the efforts of psychologists to find it, there is no seed of distrust or jealousy in his nature before Iago plays upon him. Instead of breeding the passion as the jealous do, he is infected with it though he is not asleep in the orchard it is poured into his ear. Othello confesses himself as “one not easily jealous, but being wrought perplexed in extreme.” Desdemona too believes that Othello is incapable of jealousy.
“My Noble Moor
Is true of mind and made of no such baseness.
As jealous creatures are.”

However, Othello burst forth with passion and jealousy. Hudson upholds the view that the elements of passion exist in the clearest and healthiest minds and may be kindled in a transient way over them, jealousy is not the leading feature of Othello’s character much less his character itself.

CRITICAL APPRECIATION OF DOVER BEACH Standing at the window with his wife in course of his honeymoon trip to Dover, the poet watches the sea. The sea is calm, the tide is high and the moon… 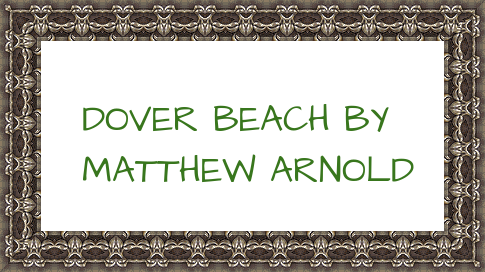 It is obvious that Seneca, the Roman Dramatist, influenced the tragic writers of England more than Sophocles and …